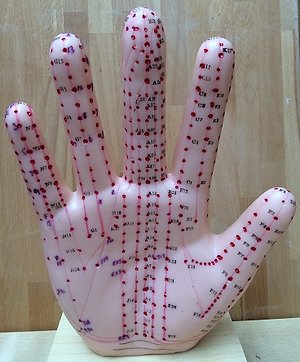 A combination of the Non-Invasive treatments can be used according to individual requirements. They are also very often used as an adjunct to body acupuncture.

Korean Hand Therapy (KHT) began in Japan in 1978 and has since become firmly established in Korea with 190 centres, and has now spread to 50 countries worldwide.

KHT can be used as an adjunct to traditional body acupuncture, or effectively on its own. It is a unique and versatile style of micro reflex acupuncture or acupressure and can be fully practiced both invasively (with needles) and non-invasively (no needles – just acupressure patches). 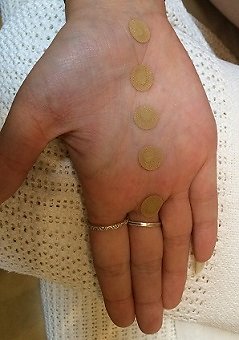 Non-invasive options are becoming increasingly popular- these include acupressure discs (on sticky patches) which are attached to the patient’s hands, thereby extending the therapeutic effect of the treatment. Needles can also be used, however the needles are much smaller than those used for body acupuncture, and the depth of penetration is extremely shallow (about 1mm), so the discomfort of treatment is minimised.

If needed moxa may also be used on various points on the hands. Moxa comes from the dried leaves of the common mugwort plant. Moxa warms the Qi and can be used to help tonify and stimulate the Qi.

Sasha has treated me for carpel tunnel syndrome after 2 steroid injections from my GP only provided temporary relief from my symptoms. The acupuncture treatment has been very effective and I would recommend this course of treatment to anyone with CTS. Sasha has also treated me for sciatica and my symptoms improved significantly even after one treatment. Sasha is very thorough and I would highly recommend her. PG 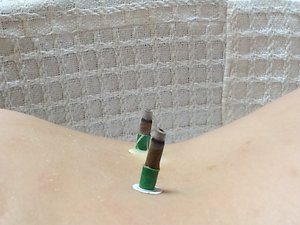 Moxa comes from the dried leaves of the common mugwort (Artemsia Vulgaris Latiflora) plant. Loose moxa can be formed into small cones, or comes already shaped in small cylinders, and are placed either directly on the body or placed at the end of acupuncture needles. They are lit and smoulder (removed long before causing any discomfort or pain) to send heat into the body. This tonifies the Qi and can be a very pleasant experience. The use of Moxa is often felt to be a gentle and relaxing experience. 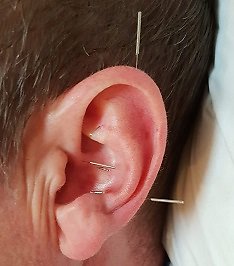 All parts of the body are reflected within the ear. Disharmony and ailments often show in the ear as swellings, markings, or tenderness in the corresponding area. While auricular therapy can be used with very small needles, there is also the option to use very tiny Tourmaline stones (on sticky patches), which remain in the ears for several hours. This is a gentle treatment, and is often used as an adjunct to body acupuncture. It is also very often used for addictions (e.g. smoking, alcohol, drug addictions). The Tourmaline stones emit an energy, resulting in an ongoing treatment that continues after leaving the treatment room. 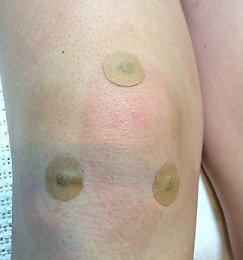 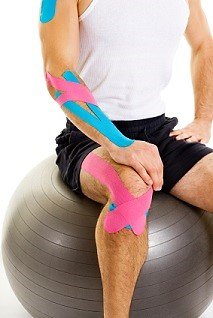 Taping has become increasingly popular in the last few years, and can often be seen on athletes. Taping involves the use of a very elastic tape which, when applied appropriately, allows for the smooth flow of blood and lymph.
Taping is often used when there is damaged tissue, for the prevention and rehabilitation of sports injuries, for muscular and skeletal injuries. Magnets can also be used in combination with Taping. 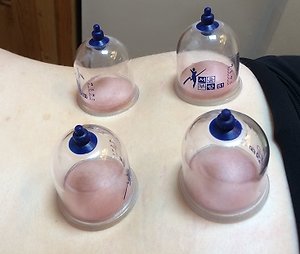 Cupping involves creating a vacuum within a glass cup, causing a suction to the skin. This encourages the movement of Blood and Qi in the channels, which is great when the problem is caused by stagnation (as can be the case in long term problems and old injuries), so is often used for chronic back pain. Cupping is also used to expel Wind, Cold, and Damp, for example in the case of a heavy cold, or asthma.

The clinic is within easy reach of Burford, Carterton, Woodstock, Eynsham, Charlbury, Brize Norton and Oxford.

The situation regarding Covid-19 is changing and relaxing. However the clinic remains Covid-19 secure, with all the safety precautions continuing to be in place.

Book and pay in advance for 5 sessions and get 6th FREE. All sessions to be taken within a three month period.

Refer a friend and receive a £10 discount from your next treatment after he / she has had their first session. 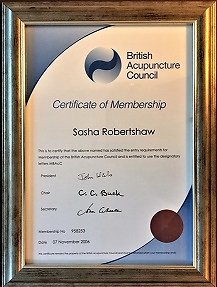 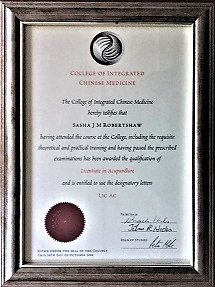